Do you want to learn original and the traditional falafel recipe? Moreover, you will find its special tahini sauce recipe. We can’t wait to share this recipe, what about you?

Falafel is the shining star dish of the middle east. Does anyone disagree with this? I think it’s not because no matter what diet you follow, this dish offers you the healthiest and most delicious meatballs.

While you’re crazy about falafel like everyone else, have you ever wondered if there’s a better recipe?

For example, have you thought about how far we’ve drifted from the original recipes because we want all the dishes to be ready faster in our daily hustle and bustle?

Here’s this recipe, just for those who want to take the time to make a real falafel. If you ask us, go to the kitchen and take some time to make the most delicious traditional falafel.

We are sure that you will realize how good a motivation this is.

So, what is the secret ingredient of falafel? Do you think it is chickpeas? If you think that’s it, we have a surprise for you.

The real secret ingredient of a traditional falafel recipe is broad beans. If this sounds a bit strange to you, don’t decide without giving it a chance.

Soak raw chickpeas and dried broad beans in water the night before.

Take a note: Make sure the proportions are the same. For example, if you used 1 cup of chickpeas, use 1 cup of broad beans.

Put the soaked legumes in the food processor and grind them until they become coarse pieces.

Finely chop the onion, garlic, red pepper, and parsley, and then put them in the processor.

Tip: There may be those who do not want to chop because these ingredients will be put into the processor anyway. But, this chopping process is an important step so that the falafel mortar does not release water.

Blend the vegetables, legumes, baking soda, and spices in the food processor until they look like wet sand.

Now bring a large plate, and spread the baking paper on it.

Then put the falafel balls on the baking paper.

Put it in the refrigerator and leave for half an hour.

That heavenly sauce that goes better than anything top on pita bread and right under the falafel balls.

You will understand how lucky you are to find this wonderful recipe when you put it on your pita bread.

Lemon juice (Use half a lemon)

Put the Greek yogurt in a mixing bowl and mix well.

Crush the garlic and add it to the yogurt.

Add salt and lemon juice as well, then mix again.

Mix all the sauce well for the last time and it’s ready.

After making the tahini yogurt sauce, continue preparing the falafel from where you left off.

Bring a small but deep pan.

Put enough oil in it to cover the falafels and heat the oil well.

After the oil is well heated, put the falafels in it and fry them until well browned on all sides.

Heat the front and back of your pita bread a little.

Put as much tahini sauce as you want on it and spread it in the middle of the bread.

Finally, squeeze a few drops of lemon and fold the pita and your traditional falafel wrap is ready.

Now that you’ve learned the secret ingredient of a traditional falafel, you can make the best one. You can use pita bread or tortilla for your falafel.

You can even have them without bread with a serving of hummus as you make it the best thing ever.

We only suggest if you prefer to consume this falafel without bread, make sure to use the tahini yogurt sauce as a dip.

If you follow a vegan diet, you can be sure that you can have the same taste sauce as vegan yogurt. You will never regret it. 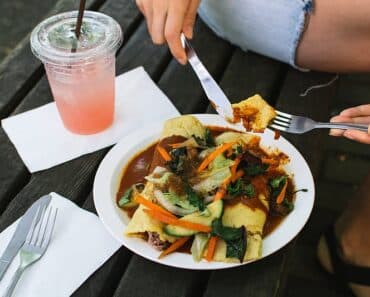